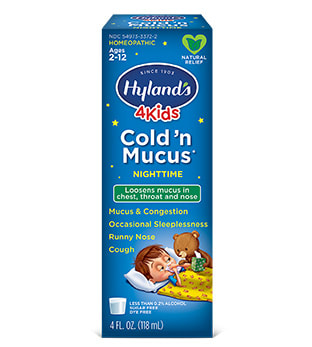 Feeling stuck and stuffed-up during the day is hard enough on your kids. But at night, that feeling makes it so hard for them to fall asleep. Our Hyland’s 4 Kids Cold & Mucus medicine now comes in a nighttime formula to help relax the body and help it get some healing sleep. The mucus breaks down during the night and the next morning, your child will not be groggy because this uses no sedatives. Great, right? OK. Lights out!

Temporarily relieves the symptoms of the common cold in children especially at night including accumulation of mucus in chest, throat and nose, cough with mucus, runny nose, sneezing, nasal congestion and occasional sleeplessness.

cough with mucus in chest

cough with mucus, dry, sore throat, sleeplessness due to mucus in throat

accumulation of mucus in throat, cough up mucus

“HPUS” indicates the active ingredients are in the official Homeopathic Pharmacopœia of the United States.

As with any drug, ask a doctor before use if pregnant or breast-feeding. Consult a physician if:

Keep this and all medications out of the reach of children. In case of accidental overdose, contact a medical professional or Poison Control Center immediately.

Do not use this product for persistent or chronic cough such as asthma, smoking or emphysema or if cough is accompanied by excessive mucus, unless directed by a licensed health care professional.

A persistent cough may be a sign of a serious condition.

Do not use if preprinted tamper band is broken or missing.

In case of emergency, contact a medical professional or Poison Control Center immediately.